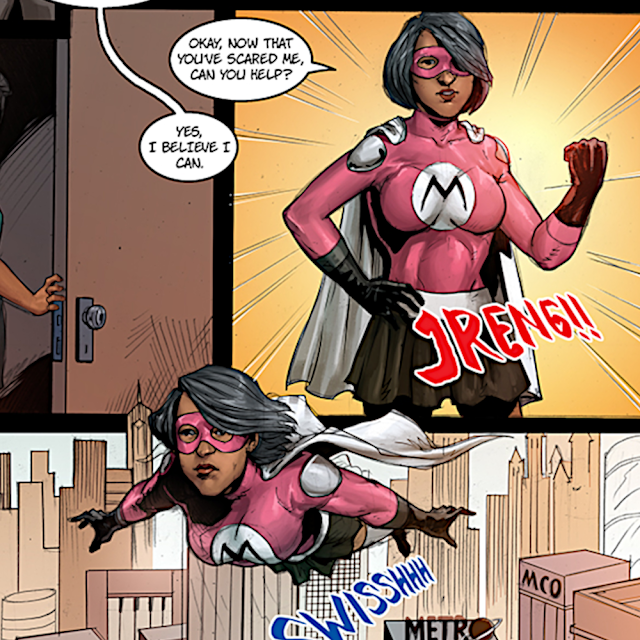 "I'm a teenager. It's the only kind we have."
Marcie is no ordinary teenager. She can fly, she is super strong and can move super fast. In her pink costume she patrols the city from the sky, on the lookout for evildoers.
Her associate keeps her updated on crime reports via radio. When she gets the call about a child abduction, that gets her immediate attention. Arriving at the scene where an eight year old girl was snatched off the street by two men in a car, she speaks to the mother and to the police. Unfortunately, this is not an isolated incident; fourteen children have gone missing and the police have no leads. Can Marcie find them?
Marcie's Marvels by writer Bill McCormick and artist Eko Prihanto is a one-off story about one young woman's personal crusade against the bad guys. It is inspired by the story of Marcie Jonea Gerald, a smart, outgoing fourteen year old girl who took her own life after becoming depressed following a sexual assault. In her memory, her mother founded the Marcie Jonea Gerald Movement (MJGM), a children's advocacy organisation dedicated to serving as a resource for children and families that are victims of sexual abuse and suicide.
In the story, Marcie lives with her blind mother who knows nothing of her daughter's alter ego (or does she?)... Being able to literally fly in and out of your bedroom window makes sneaking around  even easier than usual, but mothers - even blind ones - can be more perceptive than they appear.
Prihanto illustrates the proceedings with a light, fresh touch. Our heroine is superhuman but also human; a believable teenage girl rather than a stereotypical Amazonian goddess. This is no lycra-clad athlete with an improbably buoyant  bust (so beloved of comic fanboys of all ages), rather a very normal looking kid who could be your own sister or classmate... but with a secret life.
Her associate - a mysterious older guy who acts as researcher and protective mentor (kind of like Batman's Alfred and James Bond's Q) - provides her with her suit and various gadgets to help her in her missions. She sets off to hunt for possible locations where the missing kids are being held. She runs into plenty of trouble along the way, but nothing she can't handle.
This is straightforward caped crusader fare, but with a dark edge. It does not shy away from the grim realities of the world. Marcie is super-powered but not invulnerable. The ending is not totally happy. The message here is an uplifting one about fighting for what is right, but without the naiveté of a children's story in which everything turns out perfect once the villain has been thwarted. This is aimed at a somewhat  more mature readership. There are dangers out there and you don't make them go away by pretending they don't exist. This is also a message about awareness: knowledge is power, and empowerment is essential to young people.
The good guys will come out on top here, but the fight is never really over. This is a call to stay sharp, look out for each other and never give up. We can't make the world a perfect place but, in many ways, any one of us can be a hero.
MARCIE'S MARVELS on Bill McSci-Fi
MJG Movement 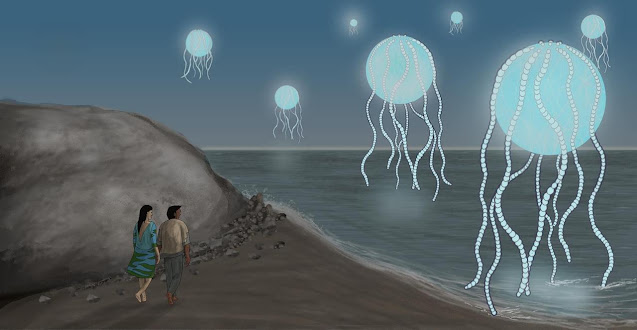